Out of town at a Flanigan’s that seems unusually quiet for 11 pm. My friend who lives in the area, in whose company I’m loitering by the hostess’ podium along with six others, tells me that it’s always like this. That it’s maybe not the safest area but that the Flanigan’s is for some reason peaceful. Family-friendly. And accordingly, as she’s making this remark about family-friendliness, we’re taken up and escorted to a booth, the eight of us, by a 30ish waiter (who’s fashioned a slender mohawk of his hair in rebellion against its thinning) and we pass, en route, a booth with four people in it: there’s a couple in their mid-/late-20s on one side of the booth and, on the other, a large older woman with her hair in a bun looking makeup-less and maternal beside her daughter, maybe fourteen or fifteen years old, who really does bear a considerable resemblance to the older woman but for the fact that she, the teen, has Down syndrome and braces and long black hair to contrast her mother’s blond.

The girl sits looking mannerly and dutiful with her hands folded gently on the table and her posture strict and straight save for the soft forward jut of her head, its leftward tilt, and it’s this earnest angling of her face that makes her look inquisitive and innocent and kind. Her expression says nothing.

The girl and I make eye contact but I break it quickly for fear that her mom might see me and take offense, mistake my glance for a stare.

(It isn’t until I’m seated that I consider how a person who loves this girl — to say nothing of the girl herself — could perhaps be bothered more by a stranger’s conspicuous effort not to look than by his propensity to stare.)

Half of the TVs in the restaurant are playing a baseball game and half are playing a UFC fight from October. My friends and I are seated across the aisle, diagonally, from the booth that seats this girl and her mother and the young straight couple.

The fight that’s playing when my friends and I take our seats is quick to end. Several minutes of ceremony ensue as the next pair of fighters make their way to the cage.

The girl’s eyes are crossed and she looks pensive. Maybe. Her companions talk and talk but she’s yet to say a word. Her attention is plugged mostly into the restaurant’s entrance, watching patrons trickle in, until, as the next fight begins, her eyes start drifting toward one of the TVs.

Older woman notices the girl’s attention drifting. Looks up to see what she’s watching: preliminaries of the fight. Older woman seems OK with this. She turns back to the young couple across from her, and I, meanwhile, am staring into my beer and being very inconspicuous and how’s the weather yes good good.

Fight begins and straight away it’s brutal. One of these guys is a perfect marksman and lands a quick succession of punches that that leave his opponent dazed, stumbling, straying from consciousness on stiffening legs until they’re up against the cage wall, both fighters, grappling on the fence until apparently their faces collide by chance and now suddenly the nose of the marksman, the guy who’d been winning a moment earlier, is broken. The referee steps in. They’re separated.

The teen watches. Head tilted. Her blinking is sparse, deliberate.

The fight recommences and the two fighters are quickly back against the fence, their faces and shoulders glazed with red. The marksman wrenches an elbow free from his opponent’s embrace and uses it to open the man’s eyebrow and in so doing releases a quick dribblestream of blood. The gore becomes torrential and the fighers are again separated. A close-up of the split eyebrow appears on screen. A medic comes and pours water over the wound and then parts it further with his forefinger and thumb so that the blood runs pale and swift.

Audible groans all over the restaurant.

The older woman looks up, sees what’s onscreen, sees her daughter watching and tells the girl to stop, look away. The daughter keeps watching until her mother grabs her by the chin and redirects her face to the table.

I check my phone.

I start listening to the conversation at my own table. Ask an ill-considered question to the person sitting beside me, a person I don’t really know, and in response to this question she pulls out her phone and shows me pictures of her dog. Provides commentary on each.

This goes on for about a fortnight and then I excuse myself to the bathroom.

When I come back it looks like she wants to keep talking. She’s got her phone poised and she’s following my approach with her eyes.

Immediately upon sitting and before she can start speaking I take up my beer and begin to drink it in a quick and urgent way until the glass is empty and I’ve got foamy rivulets running from the corners of my mouth to my ears and when I set the glass down my eyes are red and I’m out of breath and she puts her phone down and turns away.

The music reviewer only notices how dirty his glasses are when he wipes sweat from his eyes; presumed cigarette haze proves to be his own filmy grease. Suddenly and especially bright are the neon beer signs and the lipstick on his friend’s girlfriend, with whom he has just been abandoned. He dreads small talk with someone who’d wear such slick wax near her teeth. He replaces the glasses. Not a perfect cleaning job, though he can see the grain of the wood paneling, the individual trails of cigarette smoke, the time. 11:43.

“So what do you review?” the girlfriend asks. Before he answers she laughs, the kind of gaping bark that reveals teeth and tongue and how wide her mouth can be. A laugh revealing practiced flirtatiousness, simultaneously demonstrative of her mouth’s beauty (fair to moderate) and service capacity (considerable). “I mean,” she says, “who have you reviewed. Recently.”

The laugh, he realizes, is rote. Developed while flirting but unlikely flirtatious in this instance. She’s in the same predicament he is, missing their link, her boyfriend. Abandoned to polite struggle. He suspects flirtation is her survival tactic. He is not interested in her in the least though like anyone he much prefers even mild flirtation to being politely suffered. “Probably no one you’d know,” he says.

He lists some names. As a test he includes Skull Contagion, the name of the band he has come to review. He and her boyfriend are friends with its members, so if she fails to recognize the name and, by extension, the test, a great deal will be revealed.

She fails instantly. “I have no idea,” she says, leaning toward her plastic cup, sipping something clear from it.  Then she makes sudden and startling eye contact. “But aren’t you kind of a biased reviewer if you’re friends with Skull’s singer?”

So she just wasn’t listening. An imperfect test, he thinks irritably. “I’m friends with the whole band,” he says.

“How morally bankrupt of you,” she says.

“Skull’s a good band. I know that for sure, even if they’re my friends.”

“I stand corrected. How judicious of you.”

“I’m a writer,” she says. She pulls the straws into her mouth and finishes the drink. A writer. Like that isn’t exactly what he is, but with the dubious non-specificity of the total hack. He wonders whether he should persecute her with questions or leave her alone. “Oh yeah?” he hears himself say incredulously, even though he hadn’t quite decided on persecution yet. “What do you write?”

Her hand and its empty cup drop from the airspace between them.  Her face doesn’t change but its intent does; he will not be treated to anymore demonstrative laughs. Even her polite non-flirting was better than the desultory tone with which she says, “I write about exactly the same thing you do.”

“No,” she says. “Not about music. Just about the couple of things I know for sure.” 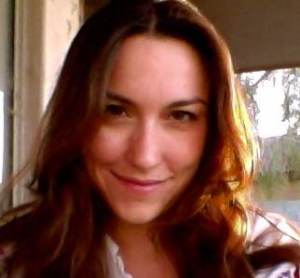 Allegra Frazier’s work has appeared in Story, theNewerYork, Carrier Pigeon, and elsewhere. She is the winner of Bayou Magazine‘s 2013 flash fiction contest. She lives in Tucson. You can visit her there or at www.allegramfrazier.com.